We decided to spend some of the money someone has printed in to this rotating ball, so, we went to studio to record our new naff album which will be released in the future, of course only if the future will exist in the future. Is it requisite that future exists in the thought first, will there be a future, if no one thinks about future? And should there be preposition "the" in the front of the word future, coz  future cant be taken for granted, there's no one future, there's myriads of different ways future(s) could or would unfold. Should future be more "a" than "the"? But in the same time no matter what comes down, it will still be (the) future. It variates a lot but it stays in the genre of future.

So, coz we draw future as we wander "forward" the immanent level of reality, could we start wandering a bit different way. Coz' to pogromate other habitants of the world, because of selfish deeds or coz' some transcendent entity said so, is a consolidation of poor mind misled by stupidity.

But, anyway, we are in the studio and Jaakko is singing like a dude that sings, and I'm typing like a motherlover.

But now I'm off, keep up doin' what ever you were doin'. PAX 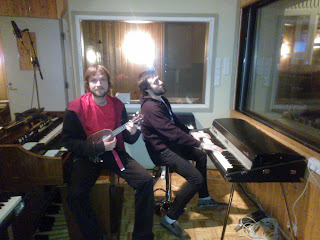 We went to studio, we got picture to prove it.