I hear bells. Eight big low chimes. All night I have heard them and I've come to the conclusion that the big low register chime represents hours. So quickly I calculate and realize that it is 8 am and I can't sleep anymore. I've been feeling a bit sick and now I feel like my brain is on fire.  Hearing church bells all night had a massive impact to my dreams. I dreamed of peasants and kings roaming in ancient Stuttgart. Market squares, taverns and knights. Swords and wizards. Vivid stuff!

Speaking of kings and castles yesterday we played in front of a palace. It felt like we were chanting spells against this huge monumental castle. Damn, I need to get rid of these medieval thoughts. Reality check: I'm in Stuttgart and the year is 2013. I'm in a small cozy hotel. Two high pitched chimes - the clock is 8:30 am. Today we have a day off and we decided to go Mannheim and see some bands and friends at maimarktgelaende. Our friend Frank Turner is also performing there. Good stuff! Die Toten Hosen which apparently is a big name in Germany is playing as well. And of course Disco Ensemble. We thought that event was too commercial so we dropped out :) 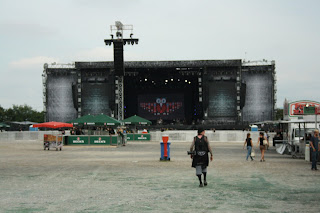 Like I wrote before we had a show in Stuttgart yesterday. We drove 500 kilometers and turned into sweaty pigs in the car. The show was in Wilhelm's Palace. The place has been used for gigs, theater and other multicultural events for a year now. It was awarded as the cultural center of the city for 2013. Now the city is closing the space and turning it into a museum. Way to go city! Now the place is full of life and a platform for new ideas and cultural events. They want to turn it to a dead room. I love museums but they are dead spaces full of history. There are already four museums nearby. Damn the man.

Summer evening in Stuttgart. Hundreds of people around and us playing punk rock. The gig was amazing. Thank you Wilhelm's Palace and Stuttgart. 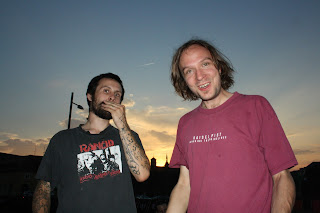 After this day the days off will end and we will have shows from Sunday to Saturday. See you there.

Posted by Weird chapters from the life of J&J at 5:15 PM